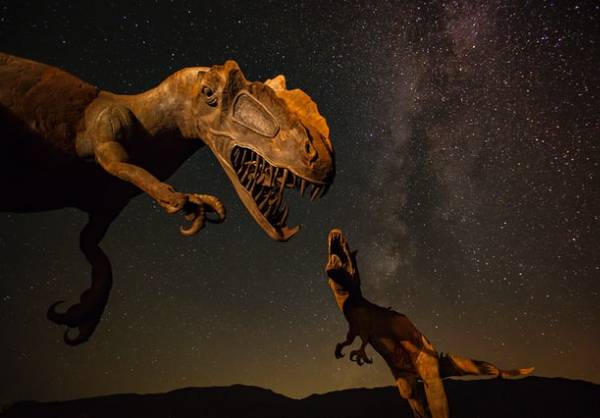 Photo by Stephen Leonardi on Unsplash.

Schoolchildren have been taught for generations that the dinosaurs were likely wiped out by an asteroid strike that hit present-day Mexico around 66 million years ago. The vision presented in schools is one of a thriving dinosaur population entirely wiped out almost overnight, as the asteroid barreled through the atmosphere at the deadliest possible angle. New research has revealed, however, that many dinosaur populations were declining long before the last extinction event.

Dinosaurs went extinct around 65 to 66 million years ago during the Cretaceous-Tertiary, or K-T, extinction event, but they had roamed the Earth for an impressive 160 million years before that. Though that cool 65 million years may seem like a long time, there is proof that dinosaurs ruled the earth for at least 230 million years before the K-T event! When the asteroid struck, three-quarters of the plant and animal species found on earth were completely exterminated, many due to starvation or similar causes.

The surviving species included some avian (bird-like) and small reptilian creatures, as well as mammals and hardier microorganisms. The number of mammals present in the time of the dinosaurs was minimal, but the extinction opened the doorway necessary for mammals to thrive and eventually dominate the once-reptilian-governed earth.

New research suggests that dinosaurs were not thriving as well prior to the asteroid strike that ultimately wiped them out as we previously thought. A 2016 study from the Proceedings of the National Academy of Sciences of the United States of America suggests that dinosaurs had been on a slow but steady decline for many years before the K-T extinction event.

This research suggests that this decline was so far along that, had the asteroid that killed the dinosaurs hit just a few million years earlier, many of the species affected would have actually survived the massive shockwaves and food shortages caused by the blast. This has led to an increased interest of the scientific community in the environmental factors faced by dinosaurs leading up to the K-T event.

The decline in the dinosaurs’ populations really began around 10 million years before the K-T extinction event. The decline occurred worldwide across a variety of groups, both carnivorous and herbivorous. There are disparities, however, in the rate of decline across species; while some species – like ceratopsians – experienced a sharp decline, others – like troodontids – experienced just a slight population decline.

This decline was most likely caused by a period of drastic global cooling, ranging from seven to eight degrees Celsius. As plant species began to wither and die, the number of herbivores began to drop. This, in turn, caused the number of carnivores to drop. This new research will affect the way scientists view dinosaurs and their environments, moving forward.

We hope this information on how dinosaur populations were declining is helpful.