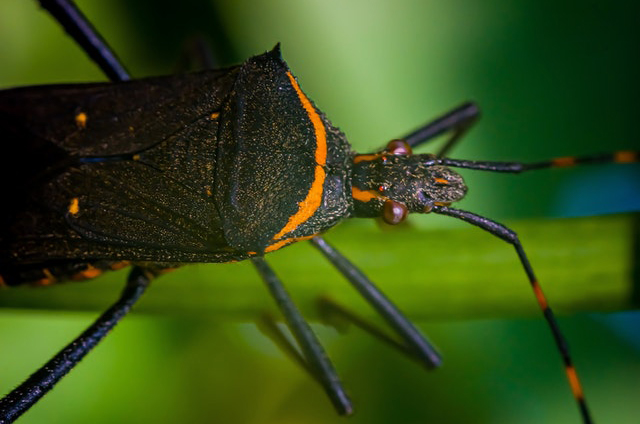 The kissing bug carries disease-causing parasites that are incredibly harmful to the human body. Photo by Macro on Pexels.

There’s a New Bug in Town

With a spectacularly hot and lively summer now in full swing, Americans are on high alert for pests. It seems like every other cable ad and news story is about a new insect repellant or surprise snake den.

Author’s aside: did anyone else see that article about the snake that surprised a man by slithering out of the pipes while he was on the toilet a few weeks ago? What a nightmare!

However, despite the seasonal uproar, many of us remain perilously unaware of one of the deadliest pests in the Americas: a shield-shaped, bloodthirsty insect known as the kissing bug.

The kissing bug gets its name from its habit of feeding around the mouths of its victims. Like a tick, the insect sucks blood from its living targets. Typically, the kissing bug will be dormant during the day, resting in dark, quiet places, and will leave the safety of its home at night when diurnal hosts are still and sleeping. However, UNLIKE ticks, the kissing bug only takes a few minutes to feed and will detach from a host at the end of a meal. The six-legged insectile vampire will then search for more victims or retreat to its colony until the following evening.

You may be asking yourself: so what? You can handle a bug bite. A nocturnal visitor giving you a little peck on the cheek is the least of your worries, right?

Wrong! Perhaps you’ve conquered the likes of mosquitos and spiders with DEET and citronella, but you haven’t had to deal with the lasting effects of kissing bug feedings. Directly after drinking a host’s blood, the kissing bug will pass very small particles of feces near the feeding site. It’s all too easy at that point for the bug’s feces to be rubbed or smeared into the feeding site, eyes, or mouth of the host. That’s where issues occur.

According to Dr. Gabriel Hamer at the Department of Entomology at Texas A&M, up to 60% of all kissing bugs carry the parasite known as Trypanosoma cruzi (T. cruzi)— the worm-like protozoa that cause Chagas disease— in their intestines. Chagas disease is deadly to humans and, unfortunately, underdiagnosed.

If a person contracts Chagas disease, it will progress in two phases. The first phase, the acute phase, starts when the parasite enters the body and can last anywhere from a few weeks to years to decades as the parasite feeds, grows, and multiplies inside its host. As the parasite’s numbers increase, the host may experience symptoms such as fatigue, vomiting, achiness, fever, rash, and other mild maladies that can be easily written off as other things like a common cold or flu. More likely, the host will experience no symptoms, which is why Chagas is so deadly.

As the unwitting host’s body becomes replete with parasites, the disease progresses to its second phase, the chronic phase. The chronic phase is characterized by parasite-invaded heart and/or gastrointestinal tissues and can lead to the sudden onset of organ failure, cardiac arrest, and stroke. Out of all Chagas cases, a third of them progress to the chronic stage.

Most people who are infected with Chagas do not know they are infected until the pain of the chronic stage drives them to seek medical attention. Sadly, Chagas is still uncommon enough in the United States that many medical professionals either misdiagnose it or fail to test for it completely, leaving the patient at risk of death. “Clinicians should be better informed about Chagas as a potential underlying factor— even in the absence of non-ischemic cardiomyopathy, which occurs years, even decades, after the infection.” Said Dr. Kacey Ernst of the University of Arizona’s College of Public health to USA Today.

In the United States, approximately 300k people are currently living with Chagas, most of them unaware of it. But outside of the United States, Chagas disease is endemic. In South and Central America— where the kissing bug originates— the CDC estimates that there are up to 8 million undiagnosed people living with the deadly parasitic infection. However, the proper tests remain difficult to come by.

Dr. Daisy Hernández, reporter, professor, and author of the novel The Kissing Bug: A True Story of a Family, an Insect, and a Nation’s Neglect of a Deadly Disease says “[Chagas] has been ignored.”

The key to ending this avoidable tragedy is awareness— awareness among both doctors and their patients. With awareness comes advocacy, and with advocacy, comes change.

How to Prevent Chagas Disease

While you summer-proof your health and homes against all of nature’s pests, keeping the kissing bug and Chagas disease on your radar may prove vital. Here are a few things you can do to lower your risk of contracting the parasite:

–Keep track of kissing bug populations. So far, kissing bugs have only been reported in the southernmost half of the United States (see this map provided by Texas A&M University), but that doesn’t mean that they couldn’t migrate further north as temperatures continue rising. Be vigilant!

–Bug-proof your property. Look under porches, woodpiles, dog houses, tool sheds, decks, foundations, leaf piles, and other dark, undisturbed places for kissing bug colonies. Clear away property debris and clean out storage rooms regularly. If you’re able to, relocate outside structures like chicken coops, rabbit hutches, dog kennels, barns, trailers, and other animal-housing architecture a safe distance away from your home so if a kissing bug feeds on your animals, they won’t be able to jump from them to you easily. Seal cracks and gaps around your doors, windows, floorboards, baseboards, etc. so bugs have a harder time getting inside. Additionally, at night, keep exterior lights off and use black-out curtains to avoid attracting light-attracted kissing bugs to your home.

–Keep updated on pet care. If your pet is a mammal (particularly a dog or cat), they can contract Chagas disease. The best way to keep them safe—and by default, keep you safe as well— is to make sure they’re getting regular checkups. Additionally, it’s vital that their living spaces are pristine. Routinely shake out and/or sterilize their beds, stalls, and cages to ensure kissing bugs don’t make a nest out of their cozy spaces and feed on them while they sleep. Pets and their homes should always be clean!

–Schedule doctor’s appointments before and after traveling to Central or South America. As stated above, kissing bugs are much more common south of the border. To be safe, if you plan on leaving the United States, arrange for regular blood tests and frequently meet with your doctor to monitor your risk of Chagas as you move forward.

–Look for signs of being bitten after you wake up. Bites tend to be red, slightly raised, and warm for several hours after a feed. In slightly rarer cases, the bite will generate an allergic reaction, causing large red welts or hives to appear on the skin’s surface. Additionally, if kissing bug feces enters the eye, the eyelids will swell. Be on the lookout for the random appearance of a puffy eye!

–Go to the doctor if you believe you’ve been bitten FOR ANY REASON. Woke up with strange hives? Haven’t been feeling the same since your trip to Cancun? Your neighbor found what looks like a kissing bug in their home? Go to the doctor and push for a Chagas test! Even if screening materials aren’t available to you now, your willingness to ask for a Chagas test may lead to them becoming more widely available for others in your community or for you later down the line.

–Study images of the kissing bug. Lots of bugs are brown, many-legged, and vaguely shield-shaped. If you want to protect yourself against disease, it’s important that you’re able to identify a kissing bug and distinguish it from other insects living in your area.

-Notify the proper authorities if you spy a kissing bug. A kissing bug sighting is not the time to break out your home extermination kits! If you see a kissing bug— or heaven forbid, a kissing bug colony— get a safe distance away and call your local health department before you do anything else. For more information on the correct procedure to follow after finding a kissing bug, click HERE.

We hope that this information on the dangers of kissing bugs and Chagas disease is useful to you.