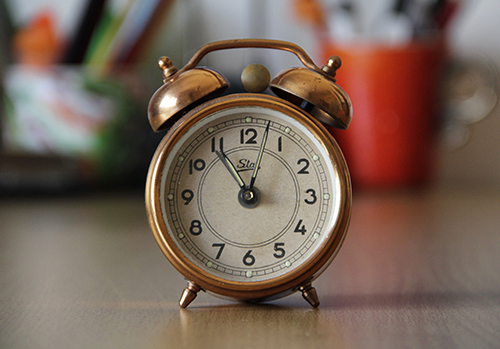 Photograph by Pixabay on Pexels.

Daylight Saving Time (DST) ends at 2:00 a.m. on Sunday, November 6. You will get back another hour of sleep and fall back to standard time. For those unfamiliar with the process, daylight saving time occurs in the spring as we adjust clocks one hour ahead of standard time to utilize more sunlight during the spring, summer, and fall evenings. Why did Daylight Saving Time begin? Is it necessary? I am sure you are curious to know the answers to these questions.

Historians believe ancient civilizations used a form of daylight saving time. For instance, Ancient Rome water clocks used different scales for different months of the year to alter daily schedules to solar time. In the modern world, people first turned their clocks forward on July 1, 1908, in Port Arthur (currently Thunder Bay, Ontario), Canada. More Canadian cities decided to join in on the time switch over the next few years. By 1916, Regina, Saskatchewan, passed a law making the time change automatic. Germany spread the idea even further to conserve fuel for artificial light two years into World War I on April 30, 1916. Several weeks later, many other countries followed suit. They returned to standard time after the war, and most countries used DST during the next world war.

When did the US begin Daylight Saving Time?

In March 1918, the United States Congress passed a bill to begin daylight saving time. The practice was so unpopular the government repealed the bill after seven months. During World War II, President Franklin Roosevelt created a year-round daylight saving time referred to as War Time. From 1945 to 1966, there was no federal law instituting DST. There was much confusion because cities and states each made decisions about the exact time in their municipality. The Uniform Time Act in 1966 created daylight saving time for the entire country. It would start on the last Sunday in April and end on the last Sunday in October. In 1974, Congress passed legislation for the time change to be implemented year-round. The experiment did not last long, and the nation switched back to standard time in October 1974.

Congress created further legislation in 1986 allowing DST to start on the first Sunday of April and end on the last Sunday of October. Another change came in 2007, with the government extending daylight saving time from the second Sunday of March to the first Sunday of November. For the last few decades, DST is now more the norm than the traditional standard time. Hawaii and most of Arizona are the only remaining states to oppose DST. Hawaii keeps its own Hawaiian Standard Time (HST). The Navajo Nation acknowledges DST for consistency with its territory covering parts of Arizona, Utah, and New Mexico. Indiana was a longstanding holdout not observing the time switch but began changing its clocks in 2006.

Is the time change necessary?

Over the years, various reasons issued the time change. The altered time in spring allows for an extra hour of sunlight in the afternoon, and advocates of the switch believe people will be more likely to leave their homes, spend money, and boost the economy. People may argue that we use less energy with DST, but some scientific studies suggest otherwise. Matthew J. Kotchen and Laura E. Grant conducted a natural experiment in Indiana. Their 2011 findings show DST causes less lighting demand but more demand for heating and cooling. Kotchen and Grant estimated that DST costs Indiana households $9 million more in electric bills each year. The pair of researchers also estimated DST increased pollution emissions costing between $1.7 to $5.5 million per year.

Some health professionals claim that everyone would be better off if we cease the time change. Sleep experts say that DST can disrupt our circadian rhythms causing us to be less alert and prone to accidents and illnesses. Dr. Susheel Patil, Clinical Associate Professor of Medicine at Case Western Reserve University, states that DST usually causes people to lose sleep for about one week until their bodies adjust to the time switch. The specialist estimates people are more prone to getting in car accidents and may experience heart-related issues due to DST. Dr. Patil and his colleagues also believe that our bodies are naturally accustomed to standard time. Additional research indicates more work-related accidents during the first week after a time switch. In 2008, Dr. William F. Shughart II suggests DST cost the US workforce over $1.7 billion a year because of the time spent changing clocks. Supporters of DST may argue that in 2022 most clocks connect to the Internet and automatically change without workforce interruption. However, Chmura Economics & Analytics conducted research that estimates DST costs the US over $430 million per year. Their research suggests moving clocks forward “can lead to an increase in heart attacks, workplace injuries in the mining and construction sectors, and increased cyberloafing that reduces productivity for people who typically work in offices.”

For more insightful reading, please read about the safety of air fresheners.

We hope that this information on daylight saving time is useful to you.