During the American Revolution in 1775, colonists were fighting under multiple flags rather than uniting under one. The Second Continental Congress met in June of 1775 to create a unified colonial fighting force. Thus the Continental Army was created, under the first “American” flag, the Continental Colors. Many thought this was too similar to the British flag, so George Washington set out to create a flag that would boost morale by acting as a symbol of freedom. On June 14, 1777, the Second Continental Congress passed a resolution stating that “the flag of the United States be 13 stripes, alternate red and white…the union be 13 stars, white in a blue field, representing a new constellation.” President Woodrow Wilson then established June 14, 1916, as Flag Day to honor the date of the creation of the United States flag. However, many people don’t even know it exists, so here are some fast flag facts to get you in the spirit. 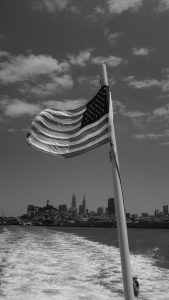 Fast Flag Fact #1 – The lyrics of “The Star Spangled Banner” are from Francis Scott Key’s poem depicting what he saw in the Battle of Fort McHenry during the War of 1812. The tune is from an old British drinking song, “To Anacreon in Heaven.”

Fast Flag Fact #2 – Flying a flag upside down can be an act of protest, or it can be an official distress signal, according to the Flag Code.

Fast Flag Fact #3 – Flag Code prohibits anyone from defacing the flag, this means no drawings or markings of any kind can be added. Many politicians throughout history have actually broken this rule by signing American flags.

Fast Flag Fact #4 – When flags of cities, states, or groups are flown on the same staff as the American flag, the Stars and Stripes are always displayed at the peak. Flags of two or more nations, however, should be the same size and flown from separate staffs of equal height.