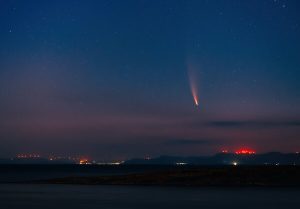 A meteor seen soaring over Texas on Sunday night, July 25, sent shockwaves throughout social media. Around 9 p.m., hundreds of eyewitnesses on the ground noticed something resembling a fireball flying through the sky.

While the fiery streak burned for only a few seconds, people in Texas, Louisiana, Arkansas, and Oklahoma reported seeing the meteor. According to NASA, it was first spotted approximately 48 miles above Texas highway 11 around Sulphur Springs. The meteor moved at about 30,000 miles per hour and traveled for about 59 miles in the atmosphere before breaking apart approximately 27 miles above the ground. The American Meteor Society reported that there were 213 separate accounts of the meteor and that it traveled in a northeasterly direction.

Because of the meteor’s burn time, Robert Lunsford of the AMS told The Dallas Morning News that it was likely made from metal or stone as opposed to dust and ice, which only last a second or two in comparison. According to Lunsford, parts of the meteor likely reached the ground in Texas, but as of July 29, there were no reported sightings of debris.

Ryan Bennett, planetarium manager at the University of North Texas said that the material found from the meteor could be valuable, and there are probably people on the ground still looking for it.

“There is value because [they may contain] a lot of precious metal, but also because they are rare. You are holding something 4 billion years old that has not been altered very much at all. So you have one of the oldest pieces of history [in your hand],” Bennett said in an interview with Fox 4.

Despite dazzling people on the ground and stirring up our socials, meteoric events are not uncommon occurrences. In July, AMS recorded 11 similar meteor sightings in Texas, although they were not as widely observed as the most recent one.

The Perseid meteor shower, which occurs yearly, usually happens between July and August. While the Perseid shower is known for its fireballs, the recent meteor was not connected to the shower.

“The fireball was at least as bright as a quarter moon, which translates to something bigger than 6 inches in diameter with a weight of 10 pounds. The slow speed (for a meteor) suggests a small piece of an asteroid produced the fireball,” NASA said in a Facebook post. And there’s more where that came from!

We hope that this information on the recent meteor sighting is useful to you.