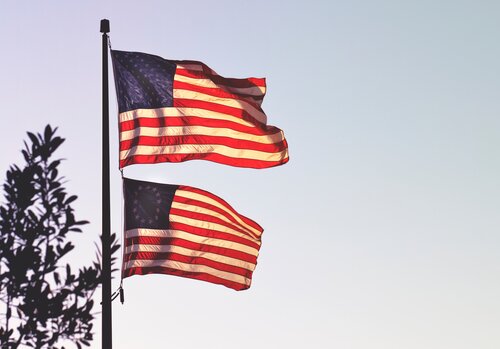 Photograph by Tim Mossholder on Pexels

Do you remember Flag Day? You may not realize that June carries a nationwide observance, and its origins reach as far back as this country’s inception. Flag Day, also known as National Flag Day, is officially observed on June 14 to honor the USA flag.

What was the first flag design?

The American Revolution began in 1775 with colonists rebelling against their imperial oppressors. The colonies’ forces had yet to organize, so each battalion fought under its own flag. In June 1775, the Second Continental Congress created the Continental Army to unite regiment forces and fight under one emblem. The initial design choice featured 13 alternating red and white stripes with a union jack in the corner. However, some colonists, including George Washington, felt this proposal resembled the British flag and was unacceptable.

Who created the first American flag?

Researchers remain uncertain about which individual created the first U.S. flag. Some historians suggest that in 1776, George Washington hired a Philadelphia seamstress, 24-year-old Betsy Ross, to create a more suitable banner for the young nation. According to folklore, Washington presented his idea for the flag to Ross. He wanted to keep the 13 alternating red and white stripes and add 13 stars in a circular pattern on top of a field of blue. Also, supposedly Ross proposed sewing five-pointed stars into the flag rather than Washington’s suggestion of six-pointed stars. Other researchers do not believe the Ross story is accurate. Instead, they point to New Jersey delegate, Francis Hopkinson, as the designer of the first U.S. flag. Hopkinson, one of 56 signers of the Declaration of Independence, is credited for creating the first coin and Great Seal of the United States. Some researchers suggest Hopkinson’s input on the first American flag was merely a standardization of an existing design.

There are a few intriguing firsts for the original American flag.

– On Feb. 14, 1778, foreign naval vessels first saluted the American flag when Captain Paul Jones helmed the ‘Ranger’ and arrived at a French port.

– In early 1778, Americans seized a British fort in Nassau, Bahama Islands. The occasion marked the first time the U.S. flag flew over a foreign territory.

When was the first observance of National Flag Day?

In 1893, Elizabeth Duane Gillespie, a descendant of Benjamin Franklin, sought to recognize Flag Day in Philadelphia. Under Gillespie’s leadership, The Society of Colonial Dames passed a resolution to urge the city of Philadelphia and its citizens to display the American flag on June 14. Unfortunately, the city failed to pass a law establishing June 14 as Flag Day. However, Philadelphia public schools participated in Gillespie’s endeavors by gathering in Independence Square. Children waved small flags while singing patriotic songs to honor the day.

In 1916, President Woodrow Wilson declared a proclamation for Americans to observe June 14 as National Flag Day. President Calvin Coolidge followed up with a similar sentiment in 1927. On Aug. 3, 1949, legislators finally approved the national observance of Flag Day, and President Harry Truman signed the bill into law. National Flag Day is an observance throughout the United States of America. Since 1937, only the commonwealth of Pennsylvania officially recognizes Flag Day as a legal holiday.

How many U.S. flags are there?

Since 1777, there have been 27 versions of the American flag. The first flag remained for 18 years, flying high between 1777 to 1795. The addition of states Vermont and Kentucky permitted the creation of a new flag with 15 stars and 15 stripes. This uniquely striped flag lasted for 23 years until 1818. Five more states were added to the union from 1796 to 1817. The country’s continued expansion made it apparent that adding more stripes to the flag would be unfeasible. Congress passed the Flag Act in 1818, reinstating the original 13-stripe design and choosing to unveil a new 20-star banner on Independence Day of that year. Each subsequent approval of statehood brought about another flag change. The 48-star American flag waved for 47 years between 1912 and 1959. The current 50-star U.S. flag exceeded that record, flying for 62 years and counting.

It is important to honor our nation’s history. You can remember Flag Day by hoisting the American flag on a sufficient flagpole or flagpole bracket. You may also want to wear a pin of Old Glory on your shirt.

If you would like to learn about American traditions, please read about The Story of Pumpkin Pie.

We hope that this information on remembering Flag Day is useful to you.