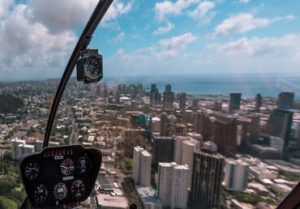 Flying Cars: Dreams or Reality? In the European nation of Slovakia, reality has set in where the AirCar completed its first ever inter-city flight. For years, something that was dreamt and thought about for years finally came to fruition as the first known futuristic flying car was seen flying around the city. When the vehicle landed, it transformed into a sports car in under three minutes, where it was driven into the capital city of Bratislava. Reaching a height of 8,200 feet in the air and speeds of up to 105mph, the AirCar is setting the stage for what could be travel’s biggest innovation in recent history.

The top speed of the aircraft is 186 miles per hour with a range of 621 miles. While the price of the AirCar is not yet known, MSN says it will be available to purchase within the next 12 months. The AirCar Prototype 1 has a 160 horsepower fixed-propeller engine which is fixated on the back of the vehicle. It was developed by KleinVision, a Slovakian firm. The flight was 35 minutes long from Nitra to the Slovakian capital, where the AirCar was driven into the city after landing its test flight. The AirCar has now exceeded 40 hours of test flights. It can be used in a variety of ways according to the developers, whether that is as a commercial taxi service or as something the consumer drives themselves.

When the vehicle is being used as a car, the wings fold up to where it will only take up the space of a normal road vehicle. The transition from Aircraft to car is an automated process, which pilots will not have to take any additional measures to complete.

“The automated transition from road vehicle into an air vehicle and vice versa, deploying/retracting wings and tail is not only the result of pioneering enthusiasm, innovative spirit and courage; it is an outcome of excellent engineering and professional knowledge,”  Dr. Branko Sarh, a former Boeing expert said.

AirSpaceX is another competitor with the goal of making flying cars a reality. The Detroit-based outlet has pledged to deploy 2,500 aircraft in the 50 biggest U.S. cities by 2026. AirSpaceX unveiled its latest prototype, Mobi-One, at the North American International Auto Show in 2018. Like its rivals, the electric aircraft is designed to hold two to four passengers and is able to vertically take-off and land. AirSpaceX has included broadband connectivity for high-speed internet access In addition to passenger and cargo services, AirSpaceX says the craft can also be used for medical and casualty evacuation, as well as tactical Intelligence, Surveillance, and Reconnaissance (ISR).

Uber is also working on taking its service to the skies. Dubbed Uber Elevate, Uber CEO Dara Khosrowshahi tentatively discussed the company’s plans during a technology conference in January 2018.

We hope this information on Flying Cars is helpful.